Posted on May 28, 2020 by Christina Anne Hawthorne

The danger of boring the reader when a character spends time alone is all too real. It isn’t lethal if skillfully done, but an animal presence makes it easier, and animals help to enhance human characters.

I first employed an animal character in Truth in the Forgotten. I wanted to show Riparia’s isolated, lonely life on the road carrying messages while simultaneously revealing her personality. Her interactions with her horse, Doppla, revealed her fears, kindness, and sense of humor. In A River in Each Hand there’s a crow with limited speech and a devoted cirque cat, among others.

When I planned Protecting the Pneuma Key last year, I assembled a list containing all my favorite story elements. One of those was animals. I wanted creatures that would be both foils and extensions of Zepha’s personality. I accomplished both with rylls.

The rylls are about eighteen inches tall on their short hind legs and are all kinds of furry cuteness. They trim branches out of trees to make elevated lodges, but Zepha’s five rylls live with her, big beaver-like teeth and all. Five rylls, five personalities. As often as they aid or assist her they also make her life an embarrassing ordeal.

I can’t overemphasize the value of animals in stories, unexpected (like the cirque cat) or not. As a way of demonstrating how an animal can turn a tale (pun intended) for the better, I’m including the original example from the original blog post…

Debra leaned back in her chair, but it did nothing to discourage the vise on her temples that laughed with each new turn. It was another meeting where false eagerness wouldn’t save anyone, not with plummeting sales.

Listening to the review was more of the never ending misery. The botched marketing plan and production delays were compounded by poor timing.

The recounting brought on more pain and the desire for something stronger than ibuprofen. Preferably in a glass. Leaning her head back didn’t help. There wasn’t more air overhead. An oxygen tank under the conference table would’ve been a nice touch.

How long before Bob started screaming? Management was a poor career choice for the balding man. Extra weight was gathering around his middle management waist. The veins on his exposed skull grew brighter by the day. Each week was anticipating the moment he’d clutch his chest and face plant.

Poor Bob. Unsympathetic superiors. Incompetent underlings. Well, one more than the others, but the culprit remained a mystery.

Staring at the tabletop, elbows down, and his hands behind his head, Bob shot his gaze the length of the table. “I’m not believing this…” Uh oh, his red face was a lobster in distress. Boiling was in progress.

How fast could she call for emergency transport?

She dared meet his gaze. He was looking at her. That was bad. Where was that oxygen tank? “Who had the projections last before you gave them to me, Debra?”

Forget blame, she had the privilege of squealing on someone else. “Bob…”

She reached to her forehead, but the vice was in the way. What was worse than ratting out a coworker in a meeting? Why didn’t he look it up? Simple. He’d cracked and the pressure was bringing on the desire for melodrama.

Wetting lips suffering from drought, she lowered her bracing hand to un-obscure the coworker across the way.

Same old Dave. He couldn’t handle the strain. Sweat was matting his black hair on his temples. Decreased oxygen prompted loosening the knot on his tie.

At the instant the tie became a noose, Dave jumped to his feet and pointed at the opposite end of the table. “It wasn’t me. I didn’t touch the figures. It was all straight. I’d never inflate numbers to hide mistakes. It was Mr. Chippers.” 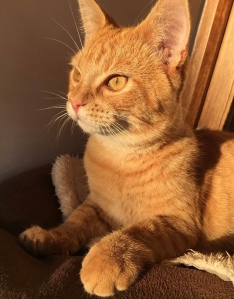 The ginger feline stared at the sweating man from atop his plush stool. The gaze said it all. Mr. Chippers was always cool when others panicked. There was one, slow blink. His calm condescension hovered, awaiting a victim. Not a whisker twitched.

Bob hung his head, shook it, and pounded both fists on the table. “Oh, come on, Dave. You know as well as I do Mr. Chippers needs to alter numbers less than anyone in this room.”

Mr. Chippers lifted a paw and spread his claws. His gaze locked on Dave. One gold eye squinted. If he’d had eyebrows one would have raised.

Everyone at the table knew the look. Bodies sank lower in their seats. Coworkers didn’t mess with someone with Mr. Chippers’ track record. He even knew how to market to dogs. Dogs! You didn’t cross a marketing marvel like that.

Frowns and diverted gazes multiplied, except for redheaded Alice from Accounting. Her sultry green eyes performed a slow blink in Mr. Chippers’ direction. Might the rumors be true? Cat treats in her purse?

Dave paced in front of his chair. “You can’t seriously pin this on me instead of the cat?”

Somber, Bob leaned back in his chair. “You’re making this personal, Dave. I can trust Mr. Chippers to handle his affairs with the upmost professionalism. He has lunch on a regular basis with some of our biggest clients. Shoot, one of them named his kid after him, for God sakes.”

“No!” Dave pounded a fist on the table. He spun around and pointed at Mr. Chippers. “This isn’t the end of it, cat. I’m not afraid of you.”

It was Dave’s last day.

Alive and well in the Rocky Mountains. I'm a fantasy writer who also dabbles in poetry, short stories, and map making. My Ontyre tales are an alternative fantasy experience, the stories rich in mystery, adventure, and romance. Alternative fantasy? Not quite steampunk. Not quite gothic. In truth, the real magic is in those who discover what's within.
View all posts by Christina Anne Hawthorne →
This entry was posted in Main Blog and tagged #amwriting, #amwritingfantasy, #WorldOfOntyre, #writerproblems, animals, cats, characters, Christina Anne Hawthorne, creative writing, fiction, humor, Ontyre Passages, world building, writers, writing. Bookmark the permalink.