My little map series continues, though it isn’t so little anymore… 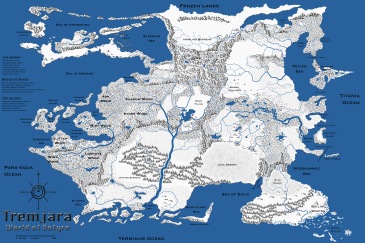 This week, as promised, the topic is the colorization of Tremjara. I mentioned last week that my desire for a color version resulted in be careful what you wish for. I wasn’t kidding. It took me a few months to create the basic Tremjara map. Colorizing it? A year, and I was devoting +4 hours/day the last several months.

Yes, it was a case of be careful what you wish for, but I’ve never been more proud of anything I’ve done. In retrospect, I’m glad I underestimated the effort the project would require. If I hadn’t, I might have given up on the idea before I began. The B&W version only required drawing a limited number of features by hand. I then applied (stamped) them on the canvas with a brush. Colorization, I realized in a hurry, was about digital painting.

What did I know about painting?

In comparison, the original Tremjara map from 2003 was like painting a small wall in my home with a roller. The Tremjara colorization project? It was more like the Sistine Chapel ceiling. 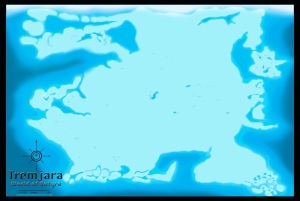 As was the case on my other digital maps, I spent the majority of my time working at the pixel level. There were times when finishing a portion of one small mountain range in a day was a victory.

Because I was colorizing an existing map I had to overcome the existing shading while taking advantage of the depth it provided. In the end, that was a benefit because it prompted me to make my colors more vivid. That wasn’t the case at the start, but I’ll talk about that in a bit.

I might as well have been drafting a novel, my imagination having no ceiling.

The original plan was, for instance, to turn all the mountains brown. Oh no, Christina’s imagination refused to settle for that. Each mountain range had to be distinctive. 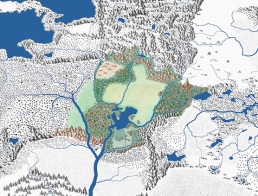 Thus, the orange-red rock of the Knarr Range inspired its red tint on the map (which is described in A River in Each Hand). Meanwhile, the Ebony Range in the southeast is a decided dark gray to black. The mountains around Glitter Wood in Mythwyll have a golden tone to them.

That wasn’t the end of my efforts on the mountains. To enhance the illusion of height, I added far more shading than originally existed. Thus, I utilized three to four different shades on each slope, the east slopes wwere again darker.

On and on it went.

The number of variations in forests and grasslands is difficult to calculate. The easy answer for the variations would be the predominate flora present, but it went farther than that and there was one particular portion of the map that prompted many of the enhancements that took over the project.

I’m talking about the renowned Seven Woods of Forstava and Mythwyll. Knowing each is unique and presenting them as such were two different things. It helped that those differences were suggested in the B&W version, but interpreting those differences via color was a challenge. They were a portion of the map that I returned to over and over again. 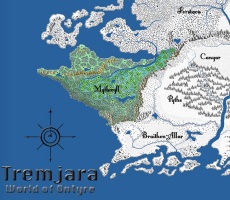 Initial work on Mythwyll for the Tremjara map. ©2020 CA Hawthorne

Speaking of becoming bogged down, how about swamps and bogs? Their colors varied depending on the amount of water present. Deserts varied according to the proportions of sand and rock. Water depth was added. I enhanced the shading along rivers and lakes (to suggest banks), which required some experimentation when I thought it’d be easy.

You’d think I’d have caught a break in the north where there was snow given the canvas was white. I discovered trying to add shading worked differently if there wasn’t existing color present. I had to paint the white with white, then shade to create the illusion of altitude variation.

Okay, that covers it. Right? Nope.

As I mentioned, the Seven Forests of Forstava and Mythwyll sparked the idea that the project could inspire enhancements beyond colorizing. Maybe, just maybe, I could add beyond what the black and white suggested.

The first such attempt was, surprisingly more difficult than I was expecting (you’d think I’d have expected problems by then). The ice wall in the Frozen Lands of the north required a fair amount of experimentation before it was how I wanted it. Painting the shading on the wall was like coloring the mountains, various grays becoming lighter near the top.

Another enhancement was a nightmare and still looks best from a distance. The flowing lava that isn’t even hinted in the B&W version. I was determined to have it, especially because I knew the red would pop!, but that also made it feel less a part of the map than the rivers. Related to that, and falling into the surprisingly difficult category, was transitioning the solidified lava of the Boiling Wastes to the beige of the Bane Desert.

I’m super proud of the Sinking Sands in the Juka Desert. The Sinking Sands, like the ice wall, didn’t exist until the map’s colorization. Other, smaller details I added were cliffs in the canyons, like those along the River Pax.

Oh, the Rocklands. I had a lot of fun there. I added strips of green bordering the rivers and lakes, a region I’d originally thought of as not possessing grass. As someone who used to live in Wyoming, you’d think I’d know better. Chasms were added around the jagged peaks. The peaks farther to the east are supposed to appear more ominous. There’s also a rock wall to the south of them (yes, inspired by the ice wall). 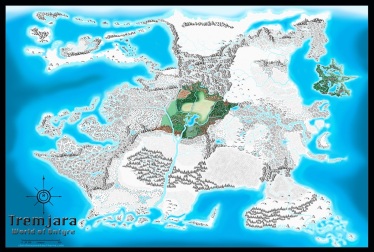 After the Seven Forests I approached each region with the idea in mind to enhance what made the area unique and build on that. That was a challenge  when I hadn’t explored all the regions of Tremjara via story yet. In those cases I had to allow the area to talk to me while I worked.

That was never more the case than Pannulus in the northeast. That island group didn’t even exist on the 2003 map (next week’s topic!).

So, that was the colorizing. As I said, it took a year, but it was a labor of love. I dearly cherish the monochrome map, but color resulted in something completely new. The color map presented unique challenges that caused me a continent’s worth of headaches, but I’m glad I pursued the project. 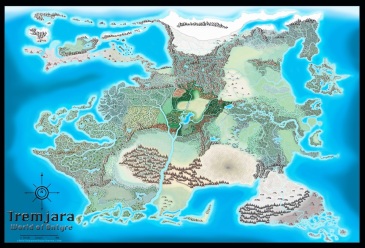 Tremjara Map, World of Ontyre. Carrdia is at 100% saturation, the rest of the map muted. ©2020 CA Hawthorne

One of those headaches was layers.

When I created the monochrome map I placed similar features on different layers. For instance, there was a mountain layer and a flora layer. The wild idea I had for the color map was to use a different layer for each region. That way I could “turn off” some regions while leaving others “on.” Too, I could regulate the color saturation by region. In other words, one area could be vivid and others muted.

Countless times I’d be in one region and would jump to another to make a change. When doing so I’d forget to switch layers, thus placing the added painting on the wrong layer. Other times, I’d be half awake and forget to create a new layer for the next region. In each instance I had to redo my work. Then there was the challenge of blending one layer into another when one didn’t actually contact the other. If I didn’t, I had a discernible line. 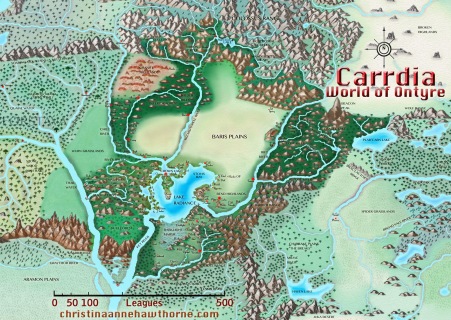 Another issue was experience. I started the map in Carrdia since I knew that best. Problem is, months later my work in Carrdia paled in comparison, not just in quality, but in literal color. Before I was done I’d completely redone Carrdia and parts of Forstava along with the countless other touch-ups needed.

Like with the monochrome map it was derived from, the color map holds up well if I zoom, but only to a certain point. Even so, a glance at the Carrdia map I created from this Tremjara map reveals certain limitations I’ll discuss as a part of next week’s blog post. Despite those limitations, not only are the Carrdia details considerable, so is the amount of space available for labeling. 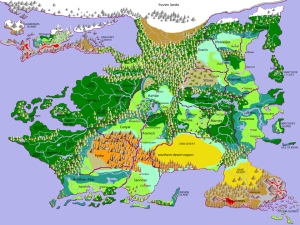 In comparison to Carrdia at the continent’s center, one of the last regions I worked on was Pannulus, the island group in the northeast. It’d already seized my imagination while creating the monochrome map. That led to countless short stories set there. Adding color made its attraction greater. Ideas for novels surfaced.

A novel needs a really good, really detailed map like the one for Carrdia. Doesn’t it? You bet it does.

Yet again, what appeared simple wasn’t as simple as I thought it’d be, but that’s next week when I conclude my map series. 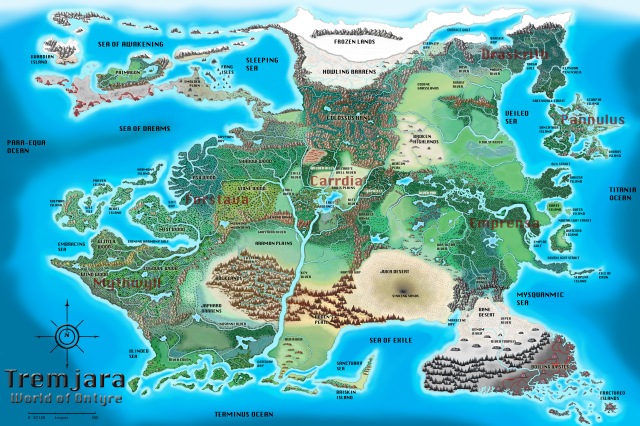 Continent of Tremjara, World of Ontyre. For fun you can compare to some of the initial painting done, or even to the older maps. ©2020 CA Hawthorne

Alive and well in the Rocky Mountains. I'm a fantasy writer who also dabbles in poetry, short stories, and map making. My Ontyre tales are an alternative fantasy experience, the stories rich in mystery, adventure, and romance. Alternative fantasy? Not quite steampunk. Not quite gothic. In truth, the real magic is in those who discover what's within.
View all posts by Ontyre Passages →
This entry was posted in Main Blog and tagged #amwriting, #amwritingfantasy, #WorldOfOntyre, alternate world, cartography, Christina Anne Hawthorne, creative writing, fantasy, fantasy maps, fiction, inspiration, learning, magic, mapmaking, maps, novel, Ontyre Passages, painting, world building, writers, writing. Bookmark the permalink.

Vague Meanderings of the Broke and Obscure