Oh so giddy am I! This week I get to talk about present day Ontyre maps. Ontyre is my world and sharing the maps is a bit like me taking you there for a visit. As you may recall, the first week I went over my influences. The second week I reviewed my first attempts at mapping Carrdia. First there was a sketch. Then there was the elaborate map that took me eighteen months to draw.

* Please keep in mind that these maps are low resolution versions. Thus, when I talk about being able to zoom in an amazing amount that won’t hold true online.

At the end of last week’s post I mentioned how I’d lamented not having drawn my early maps in the computer in the first place. Taking eighteen months to draw Carrdia inspired that thought. What would happen when I drew the entire continent? There had to be an easier, faster way.

After all, I’m a writer. I enjoy making maps, but writing is my focus.

The idea to computerize the continent came before finishing the Carrdia map in late 2001. The big question was, what were my options for creating a continent?

Remember, 2001 was the ancient computer age. I had an underpowered PC that locked-up easily and craved viruses. So, what was already on my computer? Paint.

If you’re old enough you’re probably laughing right now. If you’re younger you’re probably saying, “Huh? What’s that?” It was a rudimentary drawing program. There were literally only a handful of color options. I found a way to create more, but will get to that in a bit.

It’s so long ago I don’t recall how I decided on the unnamed continent’s outline. What I knew was that Carrdia (then called Hartise) was at the center. The south was tropics, a desert, and a volcanic region known as the Boiling Wastes. The east? Emprensa, the center of the Old Empire, was there. The north was mountains and glaciers. The west was the doomed elves (Mythwyll) and feisty ora’ean (Forstava). 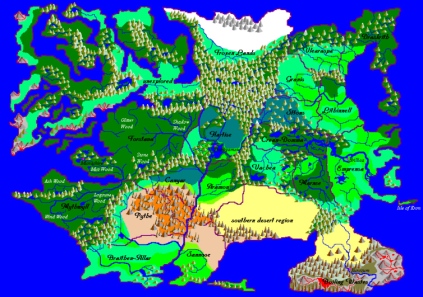 It’s hilarious now, but I had no vision for the northwest so I drew a jumbled mess of peninsulas, fjords, and bays in the empty space.

The map was extraordinarily tiny, yet even at 513MB my computer slowed. Most of the names were empire provinces. I only labeled a few cities because there wasn’t room for more.

So, what did I know about the process at the beginning? NOTHING. I knew about shading from drawing, that’s it. I learned in a hurry that greater control came at the pixel level. Yup, blowing the image up so individual pixels were visible. It was slow, but faster than drawing by hand.

The color limitations were all too real. I wanted to be able to differentiate between jungle, swamps, grasslands, deciduous forest, and evergreen forests, but I didn’t have that many shades of green. My solution was to fill pixels with two different colors in a checkerboard pattern. When viewed at 100% the eye was fooled into believing a forest was blue-green, for instance.

I had to tediously create each mountain, the only features that add definition to the map. That was where shading came in. They’re all darker on the west side and lighter on the east side.

The tiny map, completed in the summer of 2002, was okay as reference, but if I increased its size it pixelated, not that there was anything to see if I did. Almost immediately I launched into a revision, all the harder because it was one layer. Making additions or subtractions required changing pixel colors. 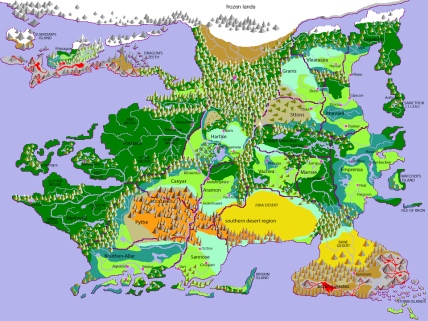 I increased the canvas size from 513MB to 744MB, which allowed for adding more islands. The mess in the northwest was cleaned-up and the frozen lands expanded. Notable are the toned down colors and added labeling. It’s hazy now, but I think I imported it into an early imaging program lighten it.

The second version was completed in late autumn, 2003 and served as my go-to map for a decade. I didn’t write from 2005 to 2012, but in-between, in 2008, purchased a Mac and Photoshop Elements (PE). Neither were acquired with map making in mind, but that was about to change.

When I returned to writing I was immediately frustrated with the old map. Given it was a time of change in my life, changing the map seemed fitting. In February, 2014 I relocated to Montana. That autumn I decided to change everything about my writing, including switching the World Of Ontyre from medieval to more of a Victorian Steampunk.

The timing was perfect. I wanted a WOW map, one with extraordinary detail where if I zoomed in it wouldn’t pixelate. By 2013 I was studying what skilled cartographers were doing. Style wise, I wanted hints of the old Tolkien map. To accomplish what I wanted I decided to use PE.

How to make a gigantic map fast? The answer was brushes, which I’d never used. Basically, they’re like stamps you can make any size you’d like, though you can literally brush with them. With brushes I’d be able to spread mountains and other features with reckless abandon. The other tool I’d need were layers, with which I had limited experience.

I even, finally, named the continent. Tremjara. In 2015 I made the uneasy decision to move ahead.

The easy part to explain is the math:

Yes, that’s the difference in size for the two maps in pixels.

The first step was to create the gigantic canvas to work on. Then, because I wanted to retain the spirit of the original map, I copied and pasted the 2003 map onto the canvas. I then stretched it to fit the space.

Once done, I selected the water since it was all one color—and deleted it. A new layer for water was then slid in beneath the continent and I had two layers. Next, I slid a layer in between those two and traced all the existing rivers with an eraser so I’d have a rough guide of where they were (even so, I  later rerouted some and added lots more). After that I scoured the land clean and enhanced the continent’s edges.

It was time to build.

For weeks beforehand I’d been working on the brushes. I found a lot of fantastic ones for free online, but my version of PE was no longer supported and couldn’t use them. That meant creating my own. Since I wanted the map to have a handmade feel to it that meant drawing features to turn into brushes.

How did I want them to look? What was within the range of my limited drawing talent? I studied other maps for inspiration, some of which wouldn’t work as brushes. My insight was that my drawn features had to be versatile so they’d fit anywhere. For instance, if the space between rivers was limited it wouldn’t do to shrink trees until they looked like grass.

I experimented with land features until I settled on a style and perspective I wanted. After, on multiple sheets of paper, I drew countless mountains. There were lone peaks, pairs, groups, and entire ranges. There were even partial mountains so they could be crammed up against others. It wouldn’t do for someone’s eye to catch where the same peaks were used over and over again. A few was okay, but not so many it became monotonous.

Those steps were repeated for all the various flora and other land features (hills, volcanoes, bluffs, arches, etc.. Next, I scanned the sheets, copied each feature, and designated it a brush in PE.

Believe me, there was a sizable learning curve. The first night working I loaded 25% of the brushes and failed to save them. The horror the next morning was memorable. Next, I worked on a small experimental map. It was sloppy, but I managed to cover it with features in less than an hour. 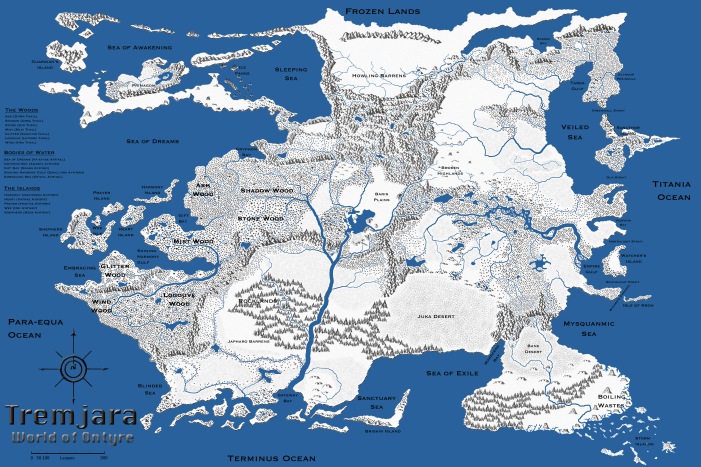 I was ready to rock and roll and I did both. It was amazing how fast it went, though there were two constraints. One limitation was that, although my goal was to enhance, I still wanted the new map to closely resemble the original.

The other limitation was that I was placing features while thinking like a writer. I wanted some amazing locations. In the end, it took mere months in 2015 and the map was completed. Even better, because I’d used layers I could easily make changes, which I did from time to time over the next eighteen months. Since layers can be turned on and off I also had the ability to make, say, all the trees disappear while the mountains remained.

My one failure were the fancy settlement symbols. Looking back it’s ridiculous that I tried. After all, I was creating an entire continent. Any symbol for a city would have to be absurdly large to show up when viewing the map at say 12.5% of full size (how most would see it on the screen). In the end, I ditched those, but not until I’d wasted far too much time on them.

Over the course of those eighteen months of revisions, initiated because of minor details that bugged me, I had Tremjara 2017. There were two notable changes made. One was increasing the size of the lake at the continent’s center in Carrdia. I wanted it to be obvious it was the largest lake on the continent. The second was expanding the island in the northeast (there’ll be a little more on that next week and a lot more in a couple of weeks).

I was doing backflips. I had a huge Tremjara map that looked like I’d drawn every bit of it. It’d only taken me a few months, and that included the learning curve with brushes and layers. Too, I could zoom in extremely close before there was any pixilation.

And then, it happened.

I’d no sooner finished Tremjara 2017 and I had a What If moment.

What if there were two versions? What if one version looked like a drawing? You know, the one I’d just completed. What if there was another that looked like a painting, like a work of art? Surely it wouldn’t be that difficult to add color to the existing map. Would it?

It was a classic case of be careful what you wish for, but that’s a tale for next week.

Alive and well in the Rocky Mountains. I'm a fantasy writer who also dabbles in poetry, short stories, and map making. My Ontyre tales are an alternative fantasy experience, the stories rich in mystery, adventure, and romance. Alternative fantasy? Not quite steampunk. Not quite gothic. In truth, the real magic is in those who discover what's within.
View all posts by Christina Anne Hawthorne →
This entry was posted in Main Blog and tagged #amwriting, #amwritingfantasy, #WorldOfOntyre, #writerproblems, art, cartography, Christina Anne Hawthorne, creativity, drawing, fantasy, fantasy maps, learning, mapmaking, maps, Ontyre Passages, Photoshop Elements, world building, writers, writing. Bookmark the permalink.