Breaking free from a conversation that was empty words anyway, Jennifer Nile folded her arms and wandered along the side of the hollow home. Let the men talk, she’d look upon the trees bordering the backyard. She might even brave what waited beyond.

The rusted swing set … had it ever held swings? Instead, there were dangling chains hoping to snare a victim. Best to not even touch the mist settling as teardrops on the tarnished metal.

Memories whispered, but she wouldn’t succumb to the home’s scorn. Let it shrink with time. The distasteful deeds were done. The childhood home was on the market. What she’d left at the cemetery was in the past, and the past was in the cemetery.

Most of the past. Not all. A sliver remained. A red droplet.

Autumn’s first storm tapped on the browning leaves with drizzled tears. Did each drop shiver and wither before plummeting?

She shivered and twisted around.

There was no sign of Paul. He was talking to the realtor while the man put up his sign, no doubt. He’d find her.

Still in black, but thankfully black flats, she faced the wood. The old path was still there. Often deer used it, but perhaps so too did neighborhood children. Digging in her purse, she extracted a tie and cinched her dark, wavy locks into a ponytail.

It wasn’t far to where she’d encountered him. Even the path’s continued clarity urged revisiting. She could do it. It was time to face the stones. One step, then another. He had to have died long ago, another wanderer buried in another unmarked grave.

She stepped to the spongy mat that was damp maple leaves blanketing the path. The stepping stones awaited. Would his ghost be there?

Long ago, the authorities declared him crazy, a danger to others. A manhunt followed. Officers with dogs. Agitated beams moving through the trees. All visible from her bedroom window.

Was he still alive? Had he been apprehended in a different state and locked away? It was too late for such worries. At best, he’d be a frail old man in the present. 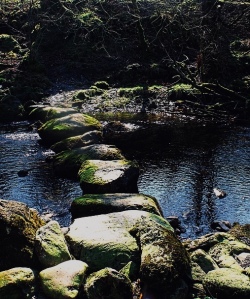 She shook her head to fling away the memories and stepped to the creek’s edge, one foot on the first stepping stone. Four stones total to make the crossing.

He’d fled the tangled woods long ago, yet his presence clung to the thicket on the far side. It’d be nothing to hop across to where he once lived and waited, his soft smile at odds with his craggy face and wild hair.

There’d be no echo if she called out, but might the forest answer for him? No, better to not blunder that far into the past. Better to allow the little girl’s heart so long in healing to remain healed.

At least therapy had taught her that much. More critical was Paul … long nights crying in his arms as each memory returned…

Squawking geese in formation flapped overhead heading south. Autumn in a valley so long removed from childhood. Memories had a way of holding time at bay, but in reality, time moved at its own pace. Only humans measured. Only humans rushed forward. Only humans ran back.

One little girl knew what it was to wish time would hurry to an age she thought she’d never see. In truth, she shouldn’t have reached it.

She sat on the rock and drew her feet close, arms wrapped around her legs. Resting the side of her face on her knees, she let memories walk to the far bank.

There were moments that time spent talking in a therapist’s secure office couldn’t erase. There were intersecting lives that couldn’t be disentangled. Life too often burdened the helpless with those who knew nothing of morality.

Sometimes, though, life provided the helpless with those vital for keeping a small heart beating.

A single tear escaped, running sideways across her face.

It was warmer the day the child-she-was first came upon the stepping stones. She was a little girl, alone, sobbing, her face buried in her hands where she sat atop a large, flat rock.

She ran adult fingertips over the granite surface. Quartz crystals scratched her skin. The chilled autumn air brushed her neck and curled around to pass the scent of decaying leaves beneath her nose. The water still chattered the same.

Once, the child-she-was happened upon the granite path across the stream. The bent man appeared on the opposite bank. Unexpected agility propelled him over the rocky bridge before she could react.

He’d asked her name, yet never shared his own.

Disarming smile. Eyes playful in a way a child understands. He’d held her. He’d never explained, but maybe there was a good reason why he understood her tears.

It was as if he knew where the bruises were located so as to avoid touching them.

They said he was crazy, a danger to others. They didn’t know where the real danger was.

From that danger they looked away. That danger wielded a massive hand when it wasn’t visiting her bed at night.

When they forced him to flee, they stole the only safety a little girl with a mother in denial had, but they couldn’t steal the cloak of hope he left around her shoulders. She wore it every day until the day she found her voice, until she found a teacher who would listen.

Soft steps on the boggy ground approached from behind. Paul. He was the last stepping stone over the water. One stone each for pain, hope, healing, and love.

She wiped her eyes and found his eyes, found his smile. Found her smile.

It was time to return to a loving home.

Alive and well in the Rocky Mountains. I'm a fantasy writer who also dabbles in poetry, short stories, and map making. My Ontyre tales are an alternative fantasy experience, the stories rich in mystery, adventure, and romance. Alternative fantasy? Not quite steampunk. Not quite gothic. In truth, the real magic is in those who discover what's within.
View all posts by Christina Anne Hawthorne →
This entry was posted in Short Stories and tagged #amwriting, abuse, child abuse, Christina Anne Hawthorne, creative writing, fiction, flash fiction, healing, hope, life, love, Ontyre Passages, writing. Bookmark the permalink.